skip to main | skip to sidebar

Well, earlier this week our doctor confirmed what we already suspected: our 12 week old son is huge...I mean, he's got his own weather system...I'm not kidding, that boy is like Sputnik...he'll be crying himself to sleep tonight, on his huge pillow.

In all seriousness, Samuel has grown quickly. The boy is now 25 inches long and 16 pounds, 15 ounces. Looking back at photographs from January, we sometimes wonder whether THAT baby and THIS baby are completely different people. Feel free to stroll down memory lane with us: check out some new pictures of our boy and catch up on another month of parenthood, the craziest trip we've ever taken (yes, including Peace Corps Tonga).

As you may or may not know, Cliff's job as a Peace Corps recruiter dictates that he travel to college campuses throughout the midwest. These absences are hard on everyone in our family, so we rely on e-mail to stay in touch. The following is an actual e-mail exchange from earlier this week.

Help me out here - I'm confused. Mom was just holding me and we were in that room in the house where you guys torture me with baths, which you claim are supposed to be relaxing, though I beg to differ. Mom was standing in front of that place where we can see the cute baby - I think you call it a mirror? She was holding me with one arm, and with the other arm she started moving this purple stick in and out of her mouth, and then foam started forming at the edge of her lips. What's up with that? She's okay, right?

You guys do the strangest stuff ... it's really kind of me to put up with it.

PS - Mom says to tell you not to think less of her because she didn't brush her teeth until 11:30. Dad, what are teeth?

To: aminchicago@yahoo.com
From: cliftonofun@yahoo.com
Subject: Re: Adults do strange things

I'm so glad you wrote with some questions; no matter how busy I am or where I might be, I always have time to answer your questions about life.

First of all, that room you were in is called the "bathroom." It makes sense when you think about it: after all, that is the room where we give you baths.

Secondly, you might have noticed that the pretty lady in the mirror looks just like your mommy. Well, that's because the mirror is a two dimensional reflective surface...there's no one in the mirror, but the mirror can reflect people who stand nearby. What does that mean, Sam? It means the cute baby in the mirror is actually you! Cool, eh?

Third, teeth grow in people's mouths to help us chew food that's harder than milk. You don't need teeth yet, since you pretty much drink every meal. Once you get them, though, and you start grinding up food, you'll notice something: teeth get really dirty. That's why we clean our teeth with brushes, just like the way we clean your body with wash rags. Hopefully, that makes sense.

Tell your mom I don't think less of her, but that I really hope she wasn't still wearing pajamas at 11:30 too.
Dad
Posted by Cliff, Amber & Sam

An Announcement: From Samuel C. Johnson

In this time of war and divisive politics, of strained budgets and a burdened middle class, of spit-up and poopy diapers, I have made a decision that will greatly affect the future of my family, my country and my world. The road will not be easy, but the path of hope never is. Never before in my life have I been so convinced that things needed to change...that I could be a part of that change in some small way. And so I, Samuel Cooksey Johnson (a Presidential name, if I do say so myself) will throw my support behind a candidate who just may lead this nation to someplace more unified, more decent, more daring. I cannot technically vote in the 2008 election, but I live in Chicago so anything is possible really. I hereby announce my support for Barack Obama's candidacy for President of these United States. 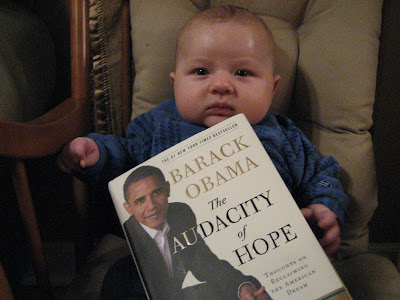 Cliff, Amber & Sam
Chicago, Illinois, United States
We started this blog as Peace Corps volunteers in the Kingdom of Tonga, and now we're continuing it as parents in Chicago. Hopefully, you'll glimpse our little corner of the world...no matter where we are.

Books we've been reading (well, Sam maybe not so much)

Movies/shows we've been watching (mostly without Sam so far)